About us - Free Bundle Magazine

We are a digital magazine committed to promote the fantasy and science fiction genres in all their forms. With a community of over +16,000 active readers across the globe, Free Bundle Magazine helps writers, small publishers and artists reach new audiences.

The Free Bundle is ad-free. We re a non-profit Magazine. We have chosen this approach to keep our content accessible to every Science Fiction & Fantasy fan around the globe.

On July 2020, we announced the global launch of the Free Bundle Originals, our series of exclusive podcasts that range from fictional audio dramas created in collaboration with upcoming voice over talents to short essays on literature, theather and film production by writers in the world of fantasy & science fiction.

Our first fictional podcast, Throug The Gates of Madness

We are a Magazine

It is finally happening: the Free Bundle Magazine is now a downloadable Magazine! The first issue’s cover is devoted to our mission, the fantastic, the weird, the strange and the horrifying in science fiction. Past issues can be read here. We have decided to drop the “newsletter magazine” from our title, since now the Free Bundle is much more than that. Below, we present you with the our new logo.

The new logo replacing the 2019 version

We are pleased to announce we now support one additional image format: WebP by Google. If you are using the latest version of Google Chrome, Microsoft Edge, Mozilla Firefox or Opera, chances are you already noticed how fast our site loads.

That is because WebP offers file sizes that are around 45% smaller than JPEG without a quality gap. It also provides transparency like PNG, and the ability to animate images like the GIF format, so we are going to be doing some crazy things with it.

To commemorate the seventh birthday of Dogeron Kenan (which, in case you haven’t heard, is the video game character that started it all for us), we are delighted to announce the rebranding of the Cabrera Brothers company logo. Incidentally, Dogeron has a free comic strip being periodically published by the Free Bundle that you really shouldn’t miss.

The new logo replacing the 2013 version

We felt our submission proccess wasn’t very inviting to newcomers, so we launched an ad campaign on Twitter and Social Networks: “Anyone Can Write Sci-Fi” and to commemorate the ocassion, we updated our submissions page.

The Magazine branding needed an extra push from our friend the Cacodemon. We are letting it roam free all over the website now in preparation for this year’s Halloween party.

We rolled out a proprietary technology that checks recent subscription numbers with our newsletter provider by programmatically making an inquiry for the past 24 hours. There is an ongoing plan to release this tool and its technology with a General Open Source License sometime in the near future.

Though there are many solutions on the market, we coded our own and called it LinkProof

Reading us just got easier than ever! We rolled out a bookmarking functionality that lets you save, read, and manage any story of our Magazine.

The best of this upgrade is that it doesn’t requires an account. Unlike other bookmark services, ours is browser-based, which means it works right out of the box by just visiting our Magazine’s web site.

We felt the design of the previous logos was a little outdated, especially (and paradoxically) the one for the Retro-Fridays newsletter. We redesigned the entire logo.

To improve the way short stories on the Fantastic Horizons section we add a customized options bar that changes text size, background color, and text layout.

Only a few months after the magazine launched we reach our first milestone: 10,000 active subscribers now enjoy reading the Free Bundle from every corner of the planet. To conmemorate the event, we delight ourselves with pounds and pounds of pizza.

We launch three more newsletters: The Vault of Horrors, The Society of Extraordinary Readers and Retro Fridays.

Reading switches from the old school magazine-look to a multi-page format. The single-page format, though original, was simply too slow for some mobile devices.

We Summoned a Demon

In the tradition of old-school publications, the now famous Cacodemon (from the Greek κακοδαίμων - kakodaimon) by co-founder and artist Carlos Cabrera, gets summoned to become the magazine’s official pet. It now overs the logo and all of our social media channels, guarding our readers.

The Free Bundle moves its infrastructure to Amazon.

The Free Bundle Magazine is born. The design goes through several iterations during launch day before the brand gets its final look. For the first issue, we feature articles on James Cameron’s new movie Alita, a list of Top Ten Christmas Movies everyone should watch during for the holiday season, a miniature painting station done from amazon scrap boxes, the best independent games of 2018, a pen and paper RolePlaying game titled “The Tower of the Beholder” and a weird fiction short story in no other than our own pulp magazine-like section, Fantastic Horizons.

The Magazine single-page format quickly divides our audience between those who love it and those urging us to change it. Despite that, the magazine reaches around +3000 new subscribers on the first couple of days after launch. 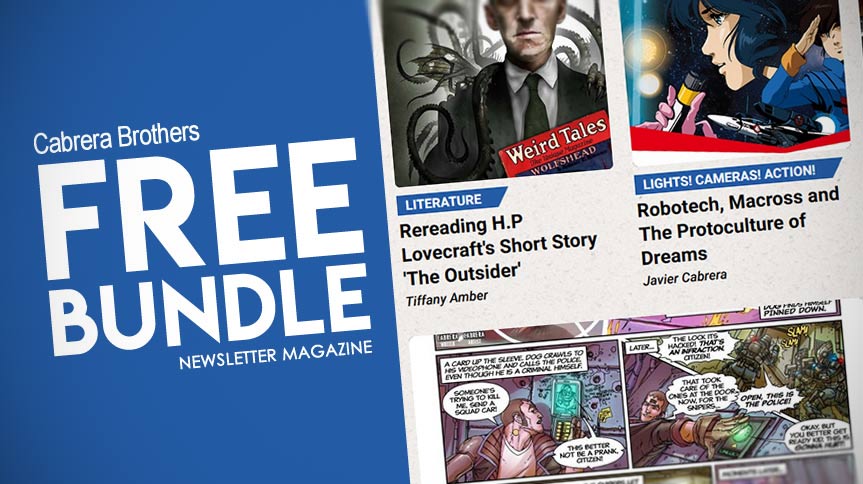 The redesign of the new Free Bundle begins. We drop Wordpress and move to a static website generator.

After almost twenty-five successful bundles, we decide to shift our focus from featuring only independent game creators to serve a broader audience. Read more about the decision here.

The free bundle offers a series of short adventure games themed around the Holiday season for both, desktop and mobile devices.

After eight successful numbers and more than half a million downloads, the site architecture becomes too large to handle with our in-house CMS. We move the entire backend to Wordpress.

The Free Bundle hosts a series of interviews with independent creators and game journalists.

The visits and downloads pile up so fast after a second “Reddit effect” that our hosting provider collapses a whole cluster of their servers. Thanks to pressure by the independent game community and developers alike, the free bundle gets restored with an upgraded plan.

The Free Bundle begins featuring android and iOs games. A whole bundle edition of “freemium” games gets added to the collection with direct links to their Apple and Google Play store pages.

The logo gets its first redesign, going from its arcade-neon look to a more polished and professional style while keeping its characteristic yellowish-orange tone.

Born to help independent game creators to promote their games, The Free Bundle became an overnight success, quickly raising among gamers and the gaming press as the place to look for new games to play. CNET, PC GAMER and even Reddit’s homepage (with over 1000 upvotes!) were talking about The Free Bundle and the creators we featured.

The games featured in the first edition of the Free Bundle reached over 150,000 downloads from every point of the planet.

This is how the page looked back when it launched, and this is how it eventually ended up looking with time.