Space can be rough for colonists, especially when they are on their own.

Morglan felt the fine grit on his teeth as he sucked the inside of his mouth for some saliva to swallow. A violent gust from the dust storm, now in its second year, had swept him out of his carrier. He watched its dim shape melt away.

The black rollers. That’s what they called the storms of the Dust Bowl in old America 200 years ago. His thoughts drifted back over the span of ten orbits around V335 Aquilae, what the exo-dreamers had dubbed Sagan’s Star. How had it come to this? They had traveled across the universe to establish the first colony on Sagan 5.

It was not the idyllic Earth-type world all had hoped to find, but by the time their expedition blasted off, neither was Earth. The 6th Ice Age was peaking. The Yellowstone super volcano in old America had erupted, throwing plate-tectonic movement into chaos. The resultant changes in ocean and atmosphere circulation patterns resulted in a dramatic and devastating drop in temperature. In comparison to the icy world Earth had become, Sagan 5 was a paradise.

Linden stood on the ridge of the command hut roof, clinging to a long dead antenna against the force of the storm. She and it struggled to remain upright. The devastation had accelerated at an alarming rate, catching them unprepared. The others had already left. Lindon had stayed at the command hut to coordinate the evacuation. While that was in progress, she had assigned Bosch and Pérez to search for Morglan.

Linden strained to make out the approaching carrier. Seeing them, she pulled up the mantle of her envirohood, and yelled, “Any sign of Morglan?”

“No, ma’am,” shouted Pérez in return, as he steered the carrier toward the blurry figure.

“We’ll never find him. Can’t see a damn thing in all this mess,” added Bosch.

“Have you looked everywhere?” yelled Linden.

“Around the greenhouse?” asked Linden.

“No way the old man could have gotten that far,” said Pérez.

“So you lazy bastards haven’t looked everywhere,” spat Linden. “Turn that thing around and go check it out.”

“Come on Cap,” whined Bosch, “ain’t no way he made it that far. Besides, everyone else has gone. It’s time we made tracks before we get swallowed up.”

“West, about two klicks,” she yelled, pointing to her left. “Go!”

For seven years, the colony had thrived on Sagan 5, building their dwellings from bits and pieces of lander craft, native stone and mud. They scratched a subsistence life from the narrow band of semi-arid land that girded the planet’s equator. Virtually all of the planet’s water was contained in its frozen polar caps or the deep aquifers that flowed beneath the surface. Some exoplanet scientists speculated that Sagan 5 had once been totally covered in water. That was before some primordial event resulted in a cataclysmic environmental change.

At first, the colonists made long journeys from the narrow band of arable land around Sagan 5’s equator to retrieve ice, which they stored in holding ponds, using the melt to irrigate their fields. Later, they dug wells from which to draw water.

Every muscle in Morglan’s body screamed for oxygen. His legs, refusing to cooperate, were little more than aching dead weight. The ferocity of the storm crushed him. Almost blinded by its fury, he searched for shelter with his hands as he pulled himself along. The Okies headed west to escape… If I could only rest for a few moments…

Pérez checked his compass as he struggled to keep on a heading toward the greenhouse. The storm seemed intent on sweeping them into oblivion. He corrected course, hunkering down against the storm surge. He leaned close to Bosch.

“Why’d the old fool have to go wander off just when we were getting ready leave?” he rasped.

“I think this godforsaken storm drove him nuts. It’ll do the same to all of us if it don’t kill us first. Hell, we may already be nuts. This storm has been going on for two years. Who knows? We might even be dead and never realize it in all this mess,” Bosch growled. He wiped his visor and stared into the roiling storm.

“See anything?” asked Pérez, keeping his eyes glued to the compass.

Bosch stared ahead. Suddenly, a shape materialized directly in their path. “Watch out!” he cried.

Pérez looked up from his compass just in time to avoid ramming the empty carrier and coasted to a stop. He maneuvered as close to it as the storm would allow, without risking a collision. “Looks empty,” he said.

“Yeah, can we go back now?” pleaded Bosch.

“No. Cap’ll have our hides. We’ll check this out, then head for the greenhouse.” Pérez peered into the murk. “By my reckoning, it’s only a few hundred yards further. There’s always a chance he made it there.”

“Do you think Cap is right?” asked Bosch.

“About Morglan? I think he’s dead and the likelihood of finding him is pretty small.”

“No, about waiting out the storm on the polar caps.”

Morglan’s left hand touched the edge of something substantial. Pulling himself forward, he reached under with his right hand to find a small cavity. As the scud swirled in gusts, he wriggled his head and upper torso inside, leaving his legs exposed. He pulled off his hood, gasping for air.

His thoughts wandered as he struggled to remain conscious. How were we to know? In year eight, Sagan 5 began to wobble on its axis. Slightly at first, the wobble continued to increase in degree of tilt. By the end the year nine, the tilt was enough to trigger the devastating climatic changes which precipitated the onslaught of violent storms. By the end of the year ten, the storms morphed into a tempest without end.

As he struggled to breathe, the inexorable storm continued its assault.

By now, the ridge of the command hut was fully inundated. Linden strained hear the sound of the carrier over the howl of the storm. Pérez and Bosch had been gone long enough to complete their search and return. She hoped they had not died or worse deserted, leaving her stranded. The com in her envirohood crackled, long rendered useless by the static electricity generated by the storm.

Finally the carrier appeared bucking against the storm caps. Bosch threw Linden a line, which she tied off on the antenna to keep it from floating away. She immediately saw the body rolling in the water on the floorboards. “Is Morglan dead?”

“You were right,” said Bosch, “he was at the greenhouse. Found him stuck half way through a roof vent. His hood was gone. Musta drowned when the water rose above the roof.”

“Should we leave him here?” asked Pérez.

“No,” said Lindon, climbing in. “We’ll take him with us. Better get going before we get swamped. She grabbed a bucket and began bailing. “Once we find the others, we’ll figure out what to do.”

“He musta gone crazy,” said Pérez. “What was he thinking to do such a thing, Cap?”

“I don’t know,” said Lindon. “Who can tell what goes through a dying man’s mind?”

Paul Stansbury is a life long native of Kentucky. He is the author of Inversion - Not Your Ordinary Stories; Inversion II - Creatures, Fairies, and Haints Oh My!; and Down By the Creek – Ripples and Reflections and a novelette: Little Green Men? His speculative fiction stories have appeared in a number of print anthologies as well as a variety of online publications. Now retired, he lives in Danville, Kentucky. 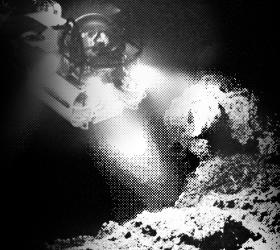