view in your browser or unsubscribe

In this book club's issue, we take a quick look at the strange and weird fiction by Clark Ashton Smith available for free on Internet Archive.

Many are aware of the work of H.P Lovecraft. His Cthulhu Mythos, after all, have been around all over the mainstream media lately. Direct or indirect and genius, his influence cannot be denied.

What many don’t know, though, is that Lovecraft was not the only one mastering the so-called cosmic horror in the pulp magazines. Another writer, one who he eventually got to admire, came up with horrors of his own and even matched Providence gentleman.

We are talking, of course, of Clark Ashton Smith.

Somewhat forgotten by the world of publishing now, Clark Ashton Smith short stories originally appeared in the pulp magazines. We are talking of Strange Tales, Astounding Stories, Weird Tales and others which, believe it or not, have some numbers freely available through the golden goose of writers: the Internet Archive.

Two of the few photographs of Clark Ashton Smith. Writer, Sculptor and Artist. All in one.

While both writers had a similar style, since they both dealt with the weird, the strange and fantastic, there is one difference that stands the most. Lovecraft, at times, was too technical. He knew his craft, there is no doubt of that, but at the same time, he felt somewhat forced compared to Clark Ashton Smith.

Smith’s prose was poetic. His way with words was far superior to Lovecraft, who would often enough fall into trying to replicate his own style story after story. Both were talented geniuses, but Clark Ashton Smith was to Lovecraft what Bradbury was to Gaiman.

Both men were friends, in fact. They corresponded after a fan letter from H. P. Lovecraft for about 15 years, talking literature and even borrowed each other’s names of the nefast gods that plague their fantastic tales.

His weird stories form several cycles, called after the lands in which they are set: Averoigne, Hyperborea, Mars, Poseidonis, Zothique.

From “The Necromantic Tale”, one of his most notable works.

“[...]Within, there were several ponderous brazen-bound volumes of mediaeval date, a thin manuscript of yellowing parchment, and two portraits whose faces had been turned to the wall, as if it were unlawful for even the darkness of the sealed door to behold them.”

The Hyperborean cycle is a series of short stories taking place in the fictional prehistoric setting of Hyperborea. Besides befriending H.P Lovecraft, Smith also kept correspondence with another pulp writer of the time, the creator of Conan and Solomon Kane (which we covered in a previous newsletter), we are talking of course of Robert E. Howard.

The Hyperborean series, is perhaps one of Smith’s best known works, though if you really want to have the complete picture, you need to get the others as well.

“[H]e described a sort of pool with a margin of mud that was marled with obscene offal; and in the pool a grayish, horrid mass that nearly choked it from rim to rim... Here, it seemed, was the ultimate source of all miscreation and abomination.”

Where to go from here

If you enjoy reading H.P Lovecraft and his cosmic horror, and you love reading Robert E. Howard Conan or Solomon Kane and you wish someone had made a crossover from these worlds and settings, then you are in for a treat. Clark Ashton Smith was that writer. We can find a direct reference to both writers and their work all through his work (and vice versa).

Some of Clark Ashton Smith most celebrated short stories from the pulp era are publicly available through the Internet Archive website (for free).

The Second Interment (Strange Tales Of Mystery And Terror)

The Resurrection of the Rattle Snake (Weird Tales)

The Hunters from Beyond (The Eldritch Dark)

If instead, what you want is a book with his collected fantasies in chronological order, we highly recommend this book from Night Shade Books to get you started. 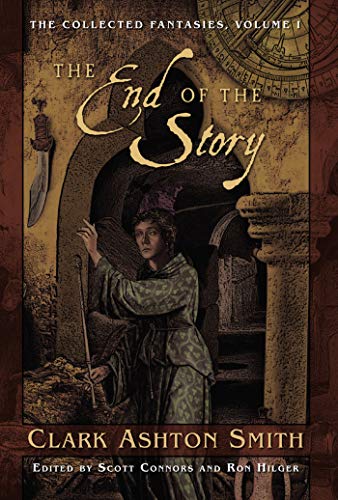 The Collected Fantasies of Clark Ashton Smith: The End Of The Story

Have you noticed something peculiar about that book cover? Something, terrifying, perhaps?

That boy’s face… he sure does looks familiar, doesn’t he?